It feels like just yesterday I posted about the 2018 books I read. The year most certainly did not fly by, and perhaps that’s because I was caught up in so much excellent reading over the past 12 months.

As per last year, what follows is a list of every title I read, with bolding for my “picks” or personal favorites. Note that some of these books made it into reviews, so they weren’t merely leisure reading.

Before the list, I need to shout out Goodreads, which now provides a snapshot of one’s reading. The data highlights are pretty fun, and open to the each user. They are also available to the public (see mine here). 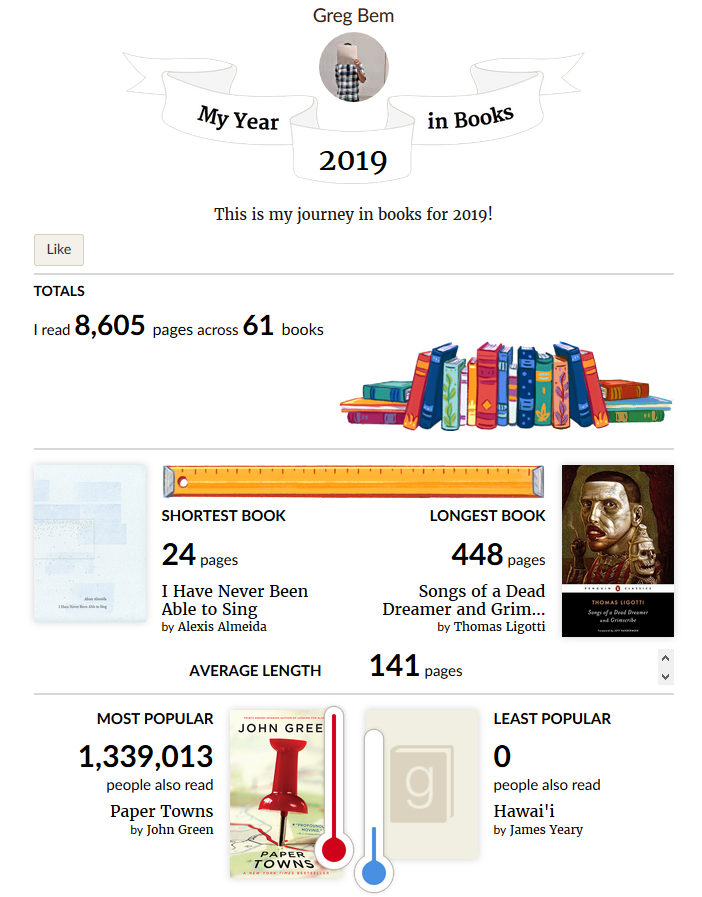 Here are the books I read last year, with my most favorite in bold:

Songs of a Dead Dreamer and Grimscribe by Thomas Ligotti

Sailing by Ravens by Holly Hughes

What Rain Does by Ann Spers

Your Blues Ain’t Like Mine by Bebe Moore Campbell

The Wretched of the Earth by Frantz Fanon

A Game for Swallows: To Die, to Leave, to Return by Zeina Abirached

A.D.: New Orleans After the Deluge by Josh Neufeld

The Handmaid’s Tale: The Graphic Novel by Margaret Atwood and Renee Nault

Against Everything: Essays by Mark Greif

The World Is All That Does Befall Us by Thomas Walton

The White Book by Han Kang

The Good Rain: Across Time & Terrain in the Pacific Northwest by Timothy Egan

The Fault in Our Stars by John Green

My Lot Is A Sky by Melissa Powers

Behold the Dreamers by Imbolo Mbue

Pedagogy of the Oppressed by Paulo Freire

The United States of Wind: A Travelogue by Daniel Canty

Cognitive Surplus: Creativity and Generosity in a Connected Age by Clay Shirky

Soundtrack to a Fleeting Masculinity by Benjamin Schmitt

What I Knew by Eleni Sikelianos

The 500 Years of Resistance Comic Book by Gord Hill

Poems from the Passionate Heart: Reflections on Healing and Awakening by Roy Holman

In These Curved Spaces by Andrea Yew

Footnotes on Falling by Joshua Ip

The Woman Who Turned Into A Vending Machine by Natalie Wang

To the Barricades by Stephen Collis

The Divine Within: Selected Writings on Enlightenment by Aldous Huxley

I Have Never Been Able to Sing by Alexis Almeida

Bones Will Crow: An Anthology of Burmese Poetry edited by James Byrne

A Drink of Red Mirror by Kim Hyesoon

The Burden of Being Burmese by ko ko thett

My Own Voice by Zeyar Lynn