This post explores what is definitely one of the event highlights of the year for me, which occurs on November 3-6.

For the past several years, the Cascadia Poetry Festival has erupted out of the Pacific Northwest and brought poetry into the consciousnesses of many. Rooted in the Cascadia bioregion as both a unique ecological center and as a pronounced cultural landscape, this poetry festival brings together a thoughtful platform for sharing art, teaching and learning ideas, and providing an intentional social space to rally like-minded artistic individuals. As explained on the official website for the fest:

The Cascadia Poetry Festival is an international event which gathers writers, artists, scientists and activists to collaborate, discover and foster deeper connection between all inhabitants and the place itself. Over four days the fest serves as cultural bioregional investigation and features Academic, Democratic and Performance components, late night readings, a Small Press Fair and several workshops. Some of the best poetry minds in the bioregion will gather, discuss this place and begin to better understand Cascadia and our role here. The festival was founded by SPLAB, a Seattle-based non-profit organization founded in 1993 and the first iteration happened in 2012. Cascadia 2 happened at Seattle U and Spring Street Center in Seattle (2014) and Cascadia 3 was staged in Nanaimo, BC, in 2015 by David Fraser and a dedicated local organizing committee.

Though I attended the first iteration of the festival (way back when), I have had the misfortune of not being able to attend the past two due to lack of availability or lack of resources. This gap between my own presence in Cascadia and my own interest in a Cascadian poetics (or, more simply, the many poetics that exist in and around Cascadia and the “American West”) is contributing to an even greater sense of interest and urgency with this festival in particular. In other words, I can’t wait! Also of note, I am responsible for co-organizing and co-hosting with Matt Trease the two after party reading events, which will take place at Common AREA Maintenance on November 4th and 5th,

Mores specifically, I’m very excited for the number of readers that will be showing their faces at the event. In addition to the flocks of writers from points south in California and Oregon, as well as points north in British Columbia, there are sure to be many Washingtonians in attendance. The featured readers who will grace the stages and workshop panels include: Daphne Marlatt, Brenda Hillman, Sam Hamill, Colleen McElroy, Marilyn Stablein, Judith Roche, Sarah DeLeeuw, JM Miller, Roger Fernandez, Tim McNulty, Erin Fristad, Jordan Abel and Peter Munro. Also, this festival is dedicated to local legend Denise Levertov, whose place in the 20th century canon has influences thousands, and whose spiritual place in Seattle is a true, deep-hearted inspiration. There’s even a kick-ass fundraising campaign aiming to raise resources to install a plaque for Levertov in the Seward Park neighborhood.

I could go on about the benefits of this festival and what it does for the infinite levels of community throughout the bioregion, but I will hold my tongue. Instead, I direct you to the ticket website, where I hope you’ll consider signing up for the festival in the many ways, shapes, and forms available.

10/31/16 Update: there is now a Facebook event for the after parties, and I designed the following flier for those: 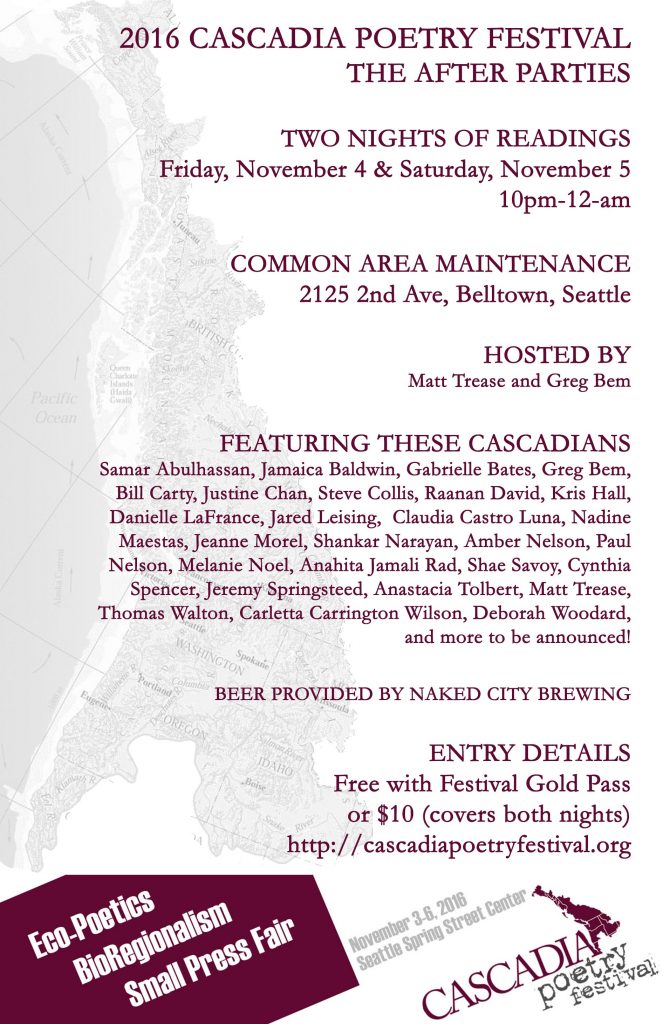